A couple of things have caused me to think back this week.

On Tuesday evening, I was lucky to see my favourite comedian again – the hilarious David o’Doherty  at the beautiful City Varieties theatre in Leeds.

Four years ago, I saw the Do’D in Manchester.  I was extremely single back then and David made an attempt to assuage my lonesomeness by asking me to be his valentine.

This morning I completed my first 20 mile+ long run of the training block around the Fewston and Swinsty reservoirs. 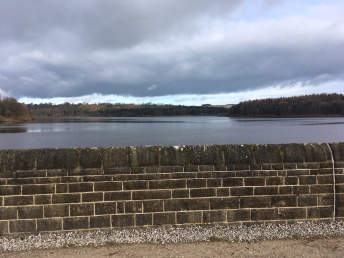 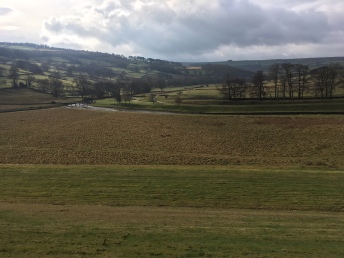 My legs were heavy and tired after a high mileage week and a hard effort at parkrun the previous day.  Despite a lack of speed, it felt great to be out.

It was one of those near perfect running days – a little chilly, but breathless with a watery low winter sunshine.  For a couple of brief moments, I think I even detected a vague hint of warmth in the sunshine.  Spring is not here yet, but it is thinking about getting its suitcase out of the attic.

Two years ago, I did a similar reservoir long run with some Valley Striders pals including Liz.  Fortunately for me, she accepted my nervous invitation to pop around to mine that afternoon to watch “The Barkley Marathons”.  Thankfully, I am single no more and no longer in need of valentines from middle-aged bearded Irishmen.

I have been blessed by a remarkable sequence of luck in the past fortnight.  Amazingly, I won a new laptop in the Old Leos rugby club raffle (my running club is based there).  On Friday night, I won another raffle at a rugby club – a bottle of champagne at a charity quiz held at Sale rugby club.  To round off a pretty fab evening our team, the Loser’s Club, won the quiz.

We stayed over at our friend’s house in Sale, so we decided to run South Manchester parkrun in Fallowfield.  It’s a cracking one-lapper held at Platt Field’s just a couple of hundred yards from my old student house.

I was up for having a right good go for a decent time, but conditions were against that with a brutal wind sweeping across the course. (Although it was as windy as chuff I was surprised that it qualified as a named storm – Erik).

I set off aggressively and was struggling quite badly at halfway into the block headwind. With around a half mile to go,  on a cinder path before the final 250m section to the finish around a boating lake, I could sense another runner, a young lad, sitting right on my shoulder.  He was no doubt lurking and looking to take the old man in the sprint.

I am nothing if not slightly competitive so as we hit the asphalt, I fired the rockets and sprinted for all I was worth.

I managed to burn him off, and I was later delighted to see there was a Strava segment for that final section to the line and I had bagged the 4th fastest time ever – out of nearly 5,000 recorded efforts.  It probably helped that I had Storm Erik up my jacksie, but Strava doesn’t record that so I can do a little stravawanker gloating…

I should have run the final Peco cross country race this morning, but I really wanted to get my 20+ done – opportunities to fit in enough proper long runs are limited.

Valley Striders always have a strong turn out at the Peco events and given that my legs were shot, it is highly unlikely that I would have counted for the team.

My long run of 20.6 miles took me nearly three hours, i.e. very slow, but it was on tired legs and was more about time on my feet than pace.